The FlowCam has been used in marine and freshwater applications since its invention in 1999. Since then, it has been found to be valuable across many industries to evaluate microparticles of importance in medicine, manufacturing, and environmental disciplines. Rarely do we see these applications cross paths - where man-made particles are being analyzed in marine and freshwater environments. One example of this intersection is the study of microplastics, and the problems they cause for our oceans and marine life.

Researchers Pravin Kannan and Fawzi Banat from the Department of Chemical Engineering, Khalifa University, UAE, have brought to our attention another such application, in their study of the pollution of marine water by dryer lint from commercial laundries. Fibers contained in this lint are a mix of natural and synthetic fibers with the potential to pollute the environment via both wastewater from washing machines, and the disposal of solid waste collected in lint traps. These fibers make up a large percentage of microplastic pollutants. There are guidelines from environmental organizations around the "wet lint" created in the washing process, however, the impact of dry lint collected in traps has not been studied until now.

Dry lint is currently disposed of in a variety of ways, including being thrown in the trash, burnt, and mixed with organic waste to create compost (which has the clear potential for negative environmental impact when the lint contains synthetic fibers). Kannan and Banat performed this study with the goal of collecting information to enhance resource recovery strategies for dryer lint. Once the material characteristics of the dryer lint are known, it will be easier to determine ways to prevent environmental pollution, potentially including wastewater treatment and the development of recycled fabrics.

Kannan and Banat collected dry lint from 5 commercial laundromats in Abu Dhabi, UAE. The samples were combined and mixed so that they represented "a mean sample averaged over multiple cycles and fabric types". The samples were cleaned in order to remove any macro-sized particles, and then analyzed via multiple techniques.

First, Water Retention Value (WRV) was determined. The lint was found to have a significantly lower WRV than once-dried cotton fibers, possibly indicating "extensive fibril aggregation due to the irreversible
collapse of pores in the fiber wall". 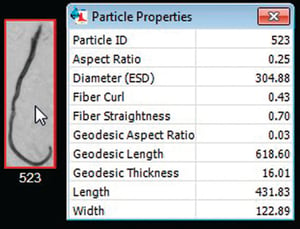 The FlowCam was then used to determine fiber size distribution. The FlowCam is preferable over other particle analysis instruments for the study of fibers because it can distinguish them from differently shaped particles using computer algorythms that can determine fiber length, width, straightness, and curl. An example can be viewed at left. Light Obscuration, Laser Diffraction and other volumetric techniques only measure the size, and not the shape of the particles in a sample, and so cannot accurately identify a fiber. Read more about the FlowCam for fiber analysis here.

The data gathered by the FlowCam can be seen in Table 1. They found that 90% of the lint volume was comprised of fibers larger than 50µm in diameter (ESD). The FlowCam also showed that the aspect ratio for most of the fiber particles was too small for the fibers to be used in recycled fabric applications (the particles are too short). There was also a great deal of diversity in the fiber shapes.

Finally, using other methods of analysis, the researchers found that the chemical processing used in commercial laundering severely affected the fibers, causing changes to their morphology, including a reduction in molecular weight, loss of crystallinity, and "the presence of microfibrils that are possibly formed by the agglomeration of elementary fibrils".

The conclusion to this study recommends that resource recovery strategies are developed to deal with laundry lint fibers, and "Although the volume of dryer lint waste generated is not significant enough for use in large-scale applications, such as solid-fuel or waste-to-energy production, it could still be engineered to manufacture high-value-added products, like adsorbents and membranes for environmental remediation.