Injectable biopharmaceuticals, particularly prefilled syringes (PFS), come with risks related to the force of injection, such as patient pain and anxiety. The injection force can often be especially high with PFSs, due to the high viscosity of the contained substances.

"In clinical practice, injection pressure is commonly estimated by the injection force, which is a measure of effort required by the user during depression of the plunger on a delivery device. Previous studies have suggested that low exerted injection force was consistent with improved patient convenience and ease of injection."

Terumo Corporation has recently developed a tapered injection needle in the hopes that it will reduce the force of injection and improve the patient experience.

Pictured above:  Schematic representation of the 29G TNN tapered needle

The researchers at U-Medico measured the injection forces in three kinds of needles, including the new tapered needle, a thin-walled needle, and a traditional cylindrical needle. They found that the injection forces were lower with the tapered needle than with the thin-walled needle in some cases, and the same in others, and that they were lower than with the traditional needle in every case.

It was also important to U-Medico to ensure that no changes occurred in the stability of the drugs themselves due to the use of the tapered needle. They used the FlowCam in conjunction with size exclusion chromatography to detect the presence of protein aggregates and/or extrinsic particles present in the formulations before and after injection with each needle. They did not find a significant difference in aggregate concentration or other particles either after injection or between each of the needles tested. This suggests that neither choice of needle, nor force of injection, significantly affects drug stability. 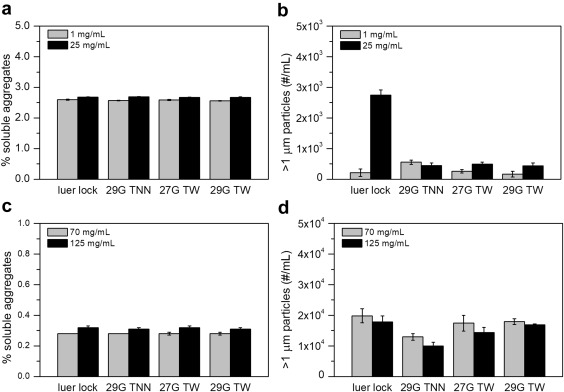 Read the full paper at the Journal of Pharmaceutical Sciences.