Nicholas Ray, PhD candidate at Boston University, was the 2016 recipient of the Fluid Imaging Technologies student research grant program.  Applicants submit proposals for how they intend to use the FlowCam within the scope of their research, and the winner is awarded the use of a FlowCam for a 4-month period. Fluid Imaging Technologies also provided Ray with a paid registration to the 2017 Coastal & Estuarine Research Federation (CERF) Conference where he gave an oral presentation on his research.

We recently caught up with Ray and discussed his research.

[Fluid Imaging Technologies]
Could you walk me through your research. Why are you interested in the effects of oysters on the silica cycle? Why is it important?

[Nicholas Ray]
Oysters can be described as ecosystem engineers – altering the environment they live in by the way they filter the water column and metabolize food. Because of their amazing filtering capacity (around 170 L per day!), they have the power to transform and recycle carbon and nutrients with profound impacts on water quality and sediment characteristics.

My dissertation research is focused on how oysters and different oyster habitats change biogeochemical cycling in a temperate estuary (Narragansett Bay, Rhode Island). Oyster populations are increasing along the East Coast of the U.S. primarily because of growing oyster aquaculture and to a lesser extent because of restoration efforts.

One of the nutrients I study is silica, which is an important regulator of diatom productivity and abundance. When water column concentrations of dissolved silica are greater than dissolved nitrogen, diatoms tend to dominate the phytoplankton community. Diatoms form the base of many coastal food webs and transfer more energy between trophic levels than other phytoplankton groups such as dinoflagellates or cyanobacteria. Dinoflagellates and cyanobacteria are also associated with poor water quality and harmful algal blooms. Therefore, higher concentrations of dissolved silica can be associated with improved water quality.

There is some evidence that oysters may change estuarine silica cycling by stimulating sediment microbial processes. Many microorganisms that live in estuarine sediment create energy by decomposing the particulate matter that sinks to the sediment. The oyster filter-feeding process moves particles suspended in the water column to the sediment as oysters feed and produce feces, and when oysters reject unfavorable particles as pseudo-feces. The feces and pseudo-feces both sink to the sediment much more rapidly than the suspended particulates the oyster feeds on, which increases the amount of organic material available for microbial decomposition in the sediment near oysters. The more organic matter available for sediment microbes, the higher the respiration rates and recycling of nutrients, like silica. These nutrients are then released from the sediment into the water column. Through this process, oysters promote a greater concentration, or availability, of silica for diatoms. 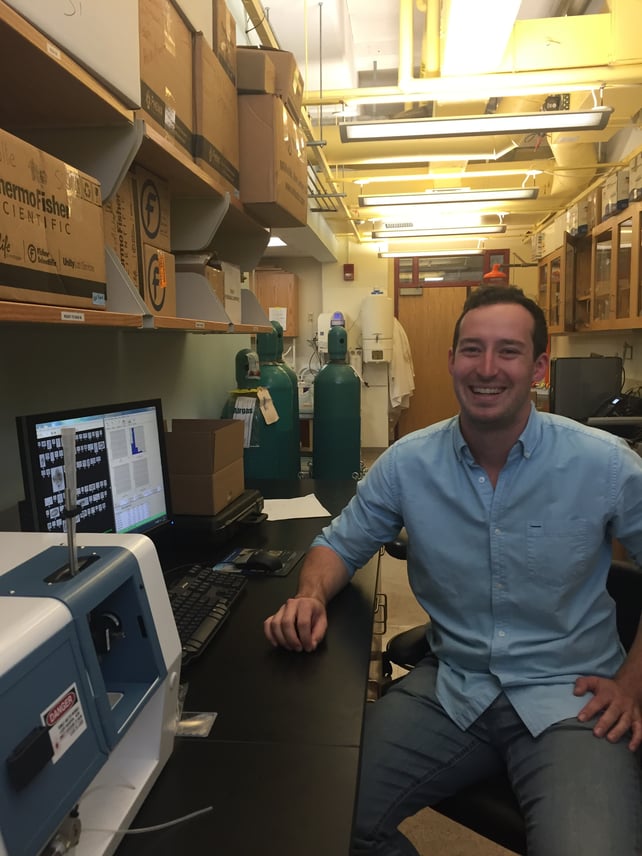 I tested whether oyster-mediated sediment silica regeneration can change the phytoplankton community using a two-part experiment. I first collected sediment cores from oyster and non-oyster habitats in Narragansett Bay, and brought them back to the lab. In the lab I used a technique called “incubation” to measure rates of nutrient exchange between the sediment and water column. The technique involves keeping the cores in a water bath of constant temperature, then capping the core and taking small samples of water over time as the dissolved oxygen concentration in the water in the core decreases. The decrease in dissolved oxygen during this incubation period lets me know that there is microbial activity occurring in the sediment. Following the incubation, the collected water samples are analyzed to determine their silica concentration. I can then calculate a silica “flux” as the change in silica concentration over time. A positive flux indicates release of silica from the sediment, and a negative flux tells me that the sediment is actively taking silica from the water column. Following the silica incubation, I removed the caps from the cores and replaced the water with water collected from my field sites. I analyzed the phytoplankton community in the water column of each core (with the FlowCam) over a four-day period to look for changes in the relative abundance of diatoms and dinoflagellates that could be related back to the measured silica flux.

I am still in the process of analyzing my data, but initial results suggest greater rates of silica regeneration from sediment collected in oyster habitats compared to non-oyster habitats. It appears that there is an increase in dinoflagellate populations in water incubated over sediment collected from non-oyster habitats. The phytoplankton community composition in water incubated over sediment from oyster habitats did not change. These results suggest that oysters may not promote increased diatom abundance but may serve more as a “phytoplankton community manager”, maintaining the community that is present and not allowing dinoflagellates to take over.

[Fluid Imaging Technologies]
How did you use the FlowCam?

[Nicholas Ray]
I used the FlowCam to analyze the phytoplankton species present in the sediment cores I collected from different oyster habitats.  I sampled the water from a total of  30 sediment cores over a 4-day period using trigger mode on the FlowCam VS at 4x and 20x magnification. I then analyzed the data collected by the FlowCam using the Visual Spreadsheet software, assigning individual particles that were identified to functional groups (e.g. diatoms and dinoflagellates). The high sample throughput rates of the FlowCam allowed me to generate a large amount of data in a short time from multiple experimental trials and field sites.

[Fluid Imaging]
We'd like your feedback on your FIT grant experience. Was it helpful? How could it have been better?

[Nicholas Ray]
Having access to a FlowCam for a summer allowed me to add a chapter to my dissertation research. Without the use of the FlowCam, I would not have been able to complete this project. I found both the initial instrument and software training, as well as all subsequent interactions with FIT to be helpful and enjoyable.

The funding FIT provided to attend the CERF conference in Providence and present the work I did was an exciting opportunity. I met and talked with other scientists who research the relationship between oysters and estuarine biogeochemistry. I think the only part of the experience that could have been better is if I was able to keep the FlowCam even longer! 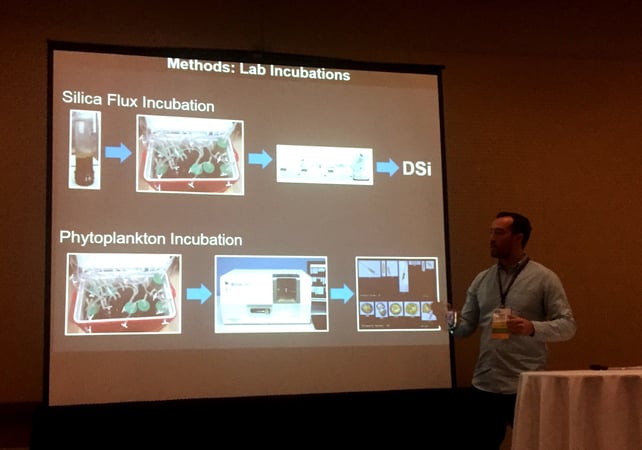 [Fluid Imaging]
What inspired you to you pursue a career in marine research?

[Nicholas Ray]
I think it is important to understand both the local and global impacts of the food we eat. My dissertation research is focused on of oyster aquaculture. I specifically like researching oysters as they change biogeochemical processes in ways that could be considered beneficial for ecosystems. I think estuaries and oceans have untapped potential for sustainable food production, and also really enjoy getting to conduct field work in and around the water!

Thanks, Nick, for taking the time to discuss your research with us. We look forward to following your research and wish you continued success with your studies!