A research group with CSIR-National Institute of Oceanography in Kochi, India (https://www.nio.org/), has used the FlowCam® to provide new evidence that temporal changes in the coastal waters of the Southeastern Arabian Sea (SEAS) cause size and structure changes in micro-plankton communities. Nutrient-rich coastal areas typically produce large-sized phytoplankton, and nutrient-depleted waters tend to produce smaller phytoplankton. These variations in plankton size can impact the food web, and therefore the economics of the area, where fishing is an important socioeconomic activity.

Dr. Karnan and his team took samples from multiple locations in the SEAS and along the southwest coast of India at multiple times throughout the year. They primarily took note of the differences between two distinct time periods: March to May (PSWM: Pre-Southwest Monsoon), characterized by warmer and thermally-stratified waters, and June to September (SWM: Southwest Monsoon) , characterized by cooler waters affected by the upwelling of deeper oxygen-depleted waters at the sub-surface, and by low-salinity estuarine waters at the surface. Additionally, they collected data from November to February (NEM: Northeast Monsoon). Regardless of the season, higher abundance and biomass of micro-autotrophs was noted closer to the coast (nutrient-rich waters). 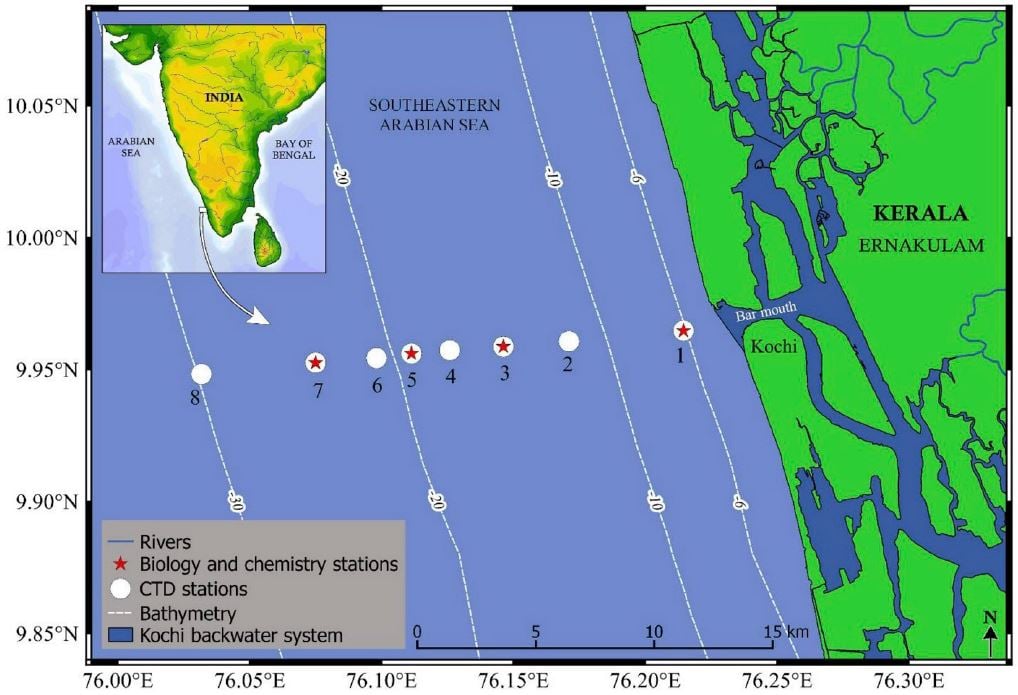 In order to analyze the samples gathered throughout the study, Dr. Karnan's team used a FlowCam VS4 with a 4x objective, and a 300µm flow cell with 100% field of view. According to Karnan et al: "The images of unwanted particles were removed and good quality plankton images (>20µm ESD) were classified to the genus level with the help of inbuilt algorithms. This is useful in sorting particles based on their morphological measurement values and automatic selection of particles based on the statistical similarity of selected particles". The team made the decision to use ABD (Area-Based Diameter) to measure the organisms as this volume algorithm gave them the most accurate results. They used an AR (Aspect Ratio) algorithm in VisualSpreadsheet®, FlowCam's proprietary software program, to estimate particle shape.

Dr. Karnan's team discovered that abundance of micro-autotrophs was highest in the PSWM season (warmer waters, more plankton), and biomass was highest in the SWM season (cooler waters, fewer but larger plankton). In general, biomass was higher in surface waters, except during the SWM season (June - September), when the larger plankton were in the subsurface waters. Similar results were obtained for micro-heterotrophs. Typical species observed during PSWM were Thalassionema and Skeletonema, while SWM featured larger species like Fragilaria and Thalassiosira.

"This study evidences for the first time that due to temporal changes in water masses in the near-shore waters in the SEAS, there are considerable seasonal and spatial variations in the size structure and composition even within the micro-plankton community itself."