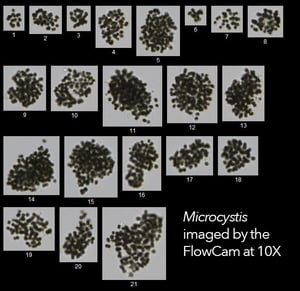 Current methods for counting Microcystis include optical microscopy, which is time-consuming, subjective, and labor-intensive. The FlowCam analyzes surface areas in two dimensions. Therefore, if algae are not distributed as single cells, cell enumeration of a three-dimensional colony could be miscalculated. Mechanical methods of cell separation have been employed, such as sonication or alkaline hydrolysis. However, up until Park et al. (2018), an image processing technique had not yet been developed for colonial cell enumeration.