Pharmaceutical and biopharmaceutical laboratories require rigid characterization of the particulate matter in injectable therapeutics. FlowCam technology offers a benchtop imaging particle analysis tool with unique software features that can discriminate particles based on morphological properties. The data obtained from FlowCam analysis can be used to verify the quality and integrity of parenteral drugs.

In this example produced in the FlowCam lab, a morphological filter was created using integrated FlowCam software, VisualSpreadsheet, to discriminate silicone oil from other particulate present within a polyclonal IgG sample. This is one example of how FlowCam users can customize software filters to create libraries and automatically sort by particle type.

A FlowCam 8100 was used to analyze the particulate within a polyclonal IgG sample from a lubricated, prefilled syringe. The two primary particulate types observed were protein aggregates and silicone oil droplets. An image was captured for each particle and over 40 physical properties were measured from each image using VisualSpreadsheet 4.

Next, a morphological filter was created in VisualSpreadsheet using a selection of physical properties that would most accurately discriminate silicone oil (Figure 1) from other particle types (Figure 2).

Of the 40+ particle properties measured by VisualSpreadsheet, the combination of the following properties and algorithms built the most successful filter:
•  Aspect ratio: the uniform circular shape of a silicone oil droplet makes this property effective at differentiating silicone oil from amorphous particulate like protein aggregates
•  Circularity (Hu): This produces the best circularity measurement when the particles have boundary defects (when the perimeter is not a perfect circle)
•  Statistical filter: uses statistical pattern recognition to find similar particles to ones chosen as examples by the user 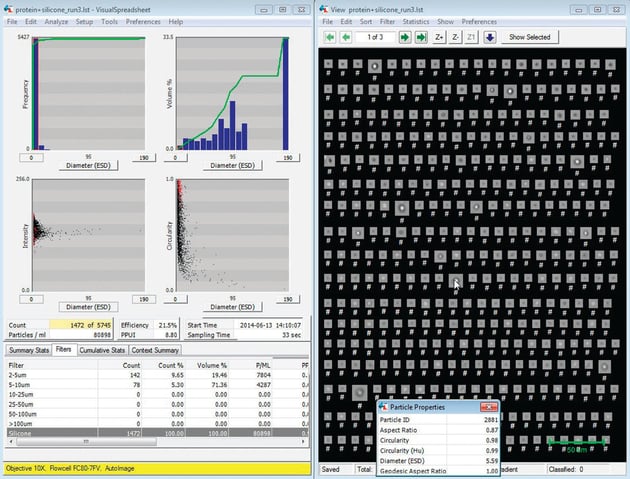 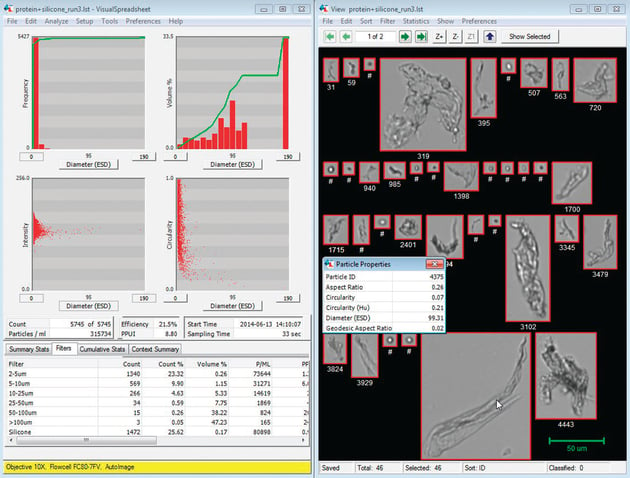 Figure 2.  The right window shows the remaining particles in the IgG sample that did not meet the filter requirements for silicone oil droplets. These were primarily protein aggregates with some other contaminants. The left window shows some of the possible analytical tools available in VisualSpreadsheet, and particle size distribution allocated into size bins ranging from 0 μm to >100 μm.

To determine the accuracy of different filter configurations, the particle images captured by the FlowCam were first visually classified and a particle type (protein aggregate, silicone oil, etc.) was assigned to each particle. After each particle was visually assigned a “known type,” the results of different filter configurations were compared to the visually classified set to evaluate the filter’s accuracy. Particulate differentiation improved when more discriminatory particle properties such as Circularity (Hu) and more powerful statistically-based methods (statistical filters) were implemented.

An accurate filter enables particle-specific analyses. Different filters can be developed using the 40+ particle properties measured by VisualSpreadsheet to perform numerous morphology-based post processing analyses. Do you require rigid characterization of your pharmaceutical product? Learn more about the FlowCam for Drug Development.