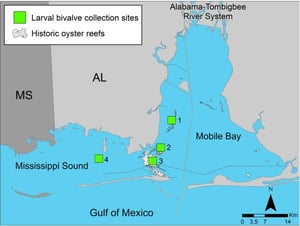 In 2018, a research study was performed by our customers, Dauphin Island Sea Lab, using oyster larvae from the Mobile Bay - Mississippi Sound system off the coast o f Alabama. There have been concerted efforts to reestablish a flourishing population of oysters and oyster reefs in this area, in order to protect the shoreline and to save the population from rapid decline. An important piece of this puzzle is the ability to track larval transport (the movement of oyster larvae from birth to adult settlements), and this study's aim was to establish a method of tracking these larvae.

Twenty-two million fluorescent calcein-stained larvae were released at both high- and low-salinity locations in order to test two things: 1) the capabilities and side effects of the calcein-staining marking method, and 2) two different methods of detection upon recapture: fluorescent microscopy and the FlowCam equipped with a 488nm laser.

Firstly, it was determined that fluorescent calcein-staining can be a successful long-term tracking method that does not effect larvae growth or survival. Secondly, it was found that although both methods worked well at identifying the calcein-stained larvae (traditional microscopy had a higher detecting capacity), the FlowCam was more efficient and practical for this application. In the end, it was determined that "the FlowCam was the most viable option for detection of large-volume, high-background field sampling". 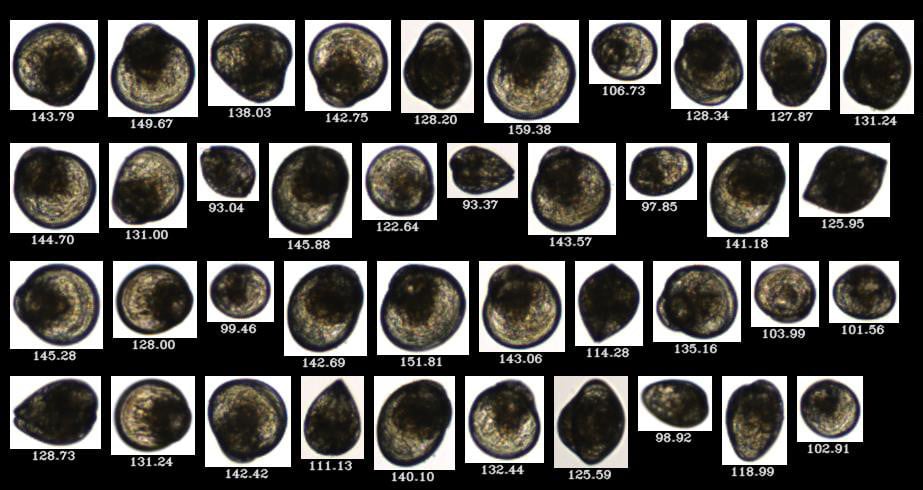 Pictured Above: Larval Oyster images captured by the FlowCam