FlowCam Used for Analysis of Diazotrophic Organisms in High-Nitrogen Water 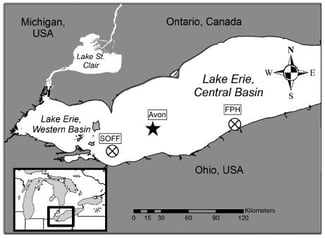 A long-term study undertaken by Chaffin et al. at Ohio State University monitored nutrient levels and phytoplankton growth in the Lake Erie central basin from 2014 until 2017. The purpose of the study was to determine the primary limiting nutrient determining phytoplankton growth, and determine if multiple limiting nutrients existed during this time period. The FlowCam was used to image and analyze phytoplankton species and to estimate biomass and biovolume of the species under consideration.

It has been taken for granted that phosphorus is the primary limiting nutrient for phytoplankton, meaning that phytoplankton growth is determined by the amount of available phosphorus in the water body. It has recently been speculated that other nutrients, including nitrogen and iron, may also affect growth. The central basin of Lake Erie is phosphorus-limited, and also experiences seasonal blooms of diazotrophic (nitrogen-producing) cyanobacteria Dolichospermum in late June to early July. Blooms like these are typically associated with low nitrogen to phosphorus ratios, however, the opposite is true of Lake Erie, which has high nitrogen levels, and low phosphorus levels, suggesting that another nutrient may be limiting growth.

The researchers tested this hypothesis by conducting nutrient enrichment bioassays and then analyzing the effects on the phytoplankton communities. They wanted to know if nutrient enrichment increased plankton biomass, or lowered nitrate concentrations.

Overall, they found that phosphorus (P) enrichment had the greatest effect on phytoplankton biomass, therefore confirming that phosphorus was the primary growth-limiting nutrient. There were cases in which other nutrients, particularly nitrogen, aided in phytoplankton growth, but there was no apparent pattern to the secondary limitation. 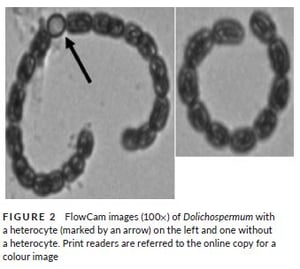 Other evidence of nutritional deficiency includes the lack of heterocyte cells in the Dolichospermum chains. Control samples taken during Dolichospermum blooms showed that heterocytes appeared in less than 23% of filaments. Adding phosphorus to the water was shown to increase the percentage of chains with heterocytes. These percentages were determined using the FlowCam.