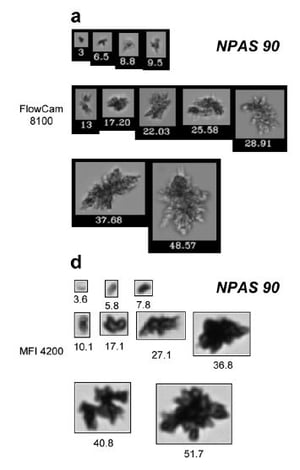 It was determined that FI may be a viable alternative to LO, as it yields number of, and detailed morphological properties of subvisible particles.  FI has been shown to be more sensitive than LO for highly transparent particles such as protein. Moreover, FlowCam provided a relatively higher number of particles compared with MFI, and consistent results were obtained using the instrument from the same manufacturer in all three samples.

Pictured above: intravenous immunoglobulin as imaged by the FlowCam 8000 imaging particle analyzer, and the MFI.