Effects of Monsoon Flooding on Microplankton Communities in Kochi Backwaters of Western India: a FlowCam Study

Researchers Karnan et al. have recently published the results of a study performed from 2013-14 in Estuarine, Coastal and Shelf Science. Their paper, titled "Implications of micro-plankton and micro-detritus on the food web in the largest monsoonal estuary along the west coast of India" tested the hypothesis that flooding would increase the quantity of available detritus in the Kochi Backwaters (KBW). 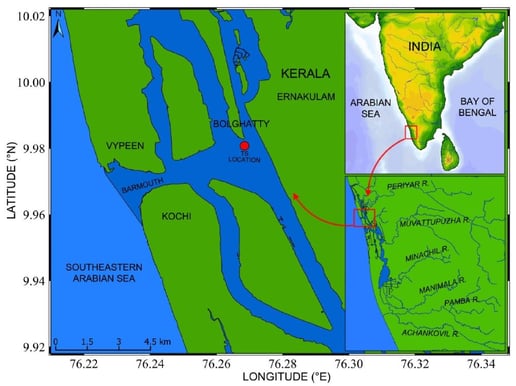 The KBW are typically dominated by sea water in the dry winter months and by freshwater during the Southwest Monsoon season (June - September) due to runoff from various rivers and agricultural sites. This runoff brings with it an abundance of nutrients and sediments. It is proposed that the size and abundance of plankton in this estuarine region are affected by the changes in salinity and availability of nutrients. A FlowCam was used to determine the size structure and biomass distribution of auto- and heterotrophic microplankton and microdetritus and their effect on the KBW's plankton food web.

Samples were taken at a fixed location near Bolghatty Island every two weeks from June 2013 to May 2014 and analyzed on a portable FlowCam VS4 using a 300µm FOV flow cell and 4X objective lens. Laser trigger mode and VisualSpreadsheet's statistical filters were employed to sort the organisms semi-automatically, and the particles were visually inspected to ensure accuracy. Karnan et al. used the Area-Based Diameter and Aspect Ratio measurements in VisualSpreadsheet to calculate biomass of individual organisms, to estimate biovolume, and to convert from there to carbon biomass.

The nutrient levels were measured for every sample, and remained high throughout the study, with the highest levels of nitrogen, silicate and phosphate all occuring from June to September. The abundance and biomass of micro-autotrophs was found to be highest from March to May (Pre-Southwest Monsoon season), and lowest from November to February. Skeletonema sp., Eunotia sp., Pleurosigma sp., and Nitzschia sp. were the dominant species found throughout the year. 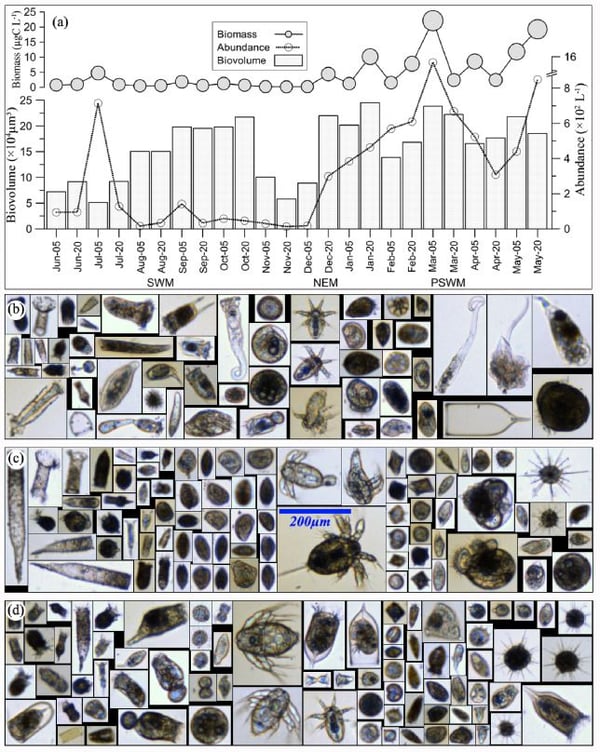 The study found the relationship between available nutrients and micro-autotrophs to be insignificant, likely due to the general abundance of nutrients available throughout the year. The opposite has been found in prior studies of the adjacent southeastern Arabian Sea (SEAS), where a significant increase in nutrients and phytoplankton abundance and biomass has been recorded due to coastal upwelling during the Southwest Monsoon season. Since the estuarine waters do not experience the same drought of nutrients during the winter months, there is not a significant difference between the seasons. The lower plankton levels observed from June - September are likely due to lower solar radiation from the turbidity of the water as a result of the flooding and runoff. Available sunlight appears to be the most important factor in KBW bioabundance.

The authors conclude that "The concomitant abundances of micro-plankton and micro-detritus during PSWM and NEM periods are indicative of an active microbial food web, which increased the biological productivity of the estuary, in general."