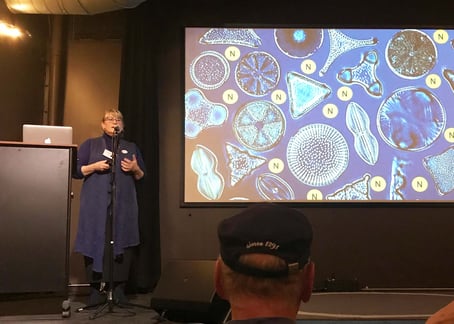 At the close of Election Day, Dr. Deborah Bronk presented on the effects of climate change on the Gulf of Maine at Frontier Cafe and Restaurant in Brunswick, Maine.

Dr. Bronk, a PhD from the University of Maryland, most recently held tenure as a Professor at the College of William and Mary where she conducted research on how phytoplankton and other aquatic microbes process nitrogen. In February 2018, she became the President and CEO of Bigelow Laboratory for Ocean Sciences.

As she stood on stage, Dr. Bronk highlighted three major factors affecting the health of the Gulf of Maine resulting from climate change: warming waters, color change, and harmful algae.

The Gulf of Maine is warming faster than 99% of the global ocean. This is primarily caused by a change in its circulation pattern due to the influx of cold fresh water from the melting of the arctic. The warmer waters are driving away cold-water species commonly found in Maine, and attracting warm water species, both on the macroscopic and microscopic level (see Harmful Algae below). If waters continue to warm, the current marine industries that Maine thrives on will be jeopardized. Despite the warming trend, lobsters appear to be unaffected at the moment.

Increased frequency of extreme precipitation events has caused an increased release of organic matter into the rivers and tributaries that feed into the Gulf of Maine. The organic matter imparts a brown color to the ocean, and is also believed to be the reason for the 80% decline in phytoplankton growth observed in the Gulf of Maine over the past 17 years. These humics essentially shade the phytoplankton, creating a "brown umbrella" and limit the amount of light accessible to the phytoplankton. Read more about the ongoing research by Dr. Barney Balch at Bigelow Lab on the impact of ocean color changes. 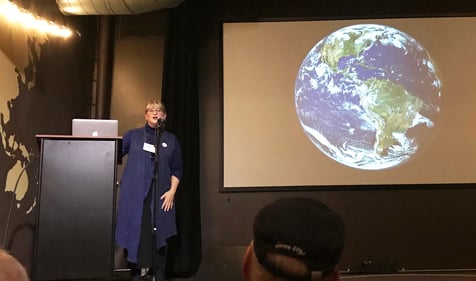 Harmful algae blooms (HABs) are on the rise in the Gulf of Maine. HABs occur when harmful algae opportunistically overtake an ecosystem. Toxins produced by harmful algae usually cause fish kills, adding more nitrogen to the system and feeding the harmful algae bloom. These toxins result in bans on shellfish harvesting and recreational activities in effected areas. In 2017, Karenia mikimotoi, a warm water harmful algae, bloomed in Casco Bay. This genus of Karenia had never before been observed in Maine, indicative of the warming waters. As waters continue to warm, we can expect to see an increase in HABs and their detrimental effects on Maine's marine industries.

Dr. Bronk stressed the importance of community involvement and advocacy to support funding for scientific research.  Some scientists theorize that it will be the ocean that regulates the Earth back to health in the face of climate change. However, ocean research lacks sufficient funding and without research, we won't be able to understand the processes affecting the oceans.

“The ocean is important to the health and economy of this country and yet the investment we have made to study and protect it is far below what is needed to address the problems we are facing.  We all need to support increased funding for science and technology in this country, especially for the study of our oceans.” -- Dr. Deborah Bronk

A few things you can do to help: 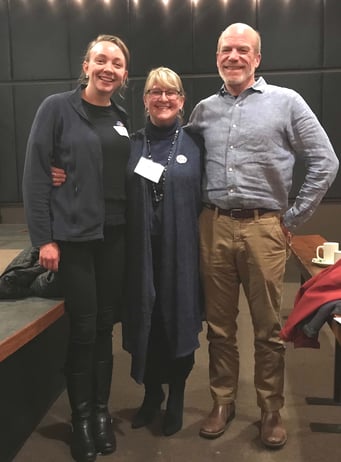