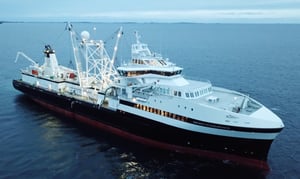 Aker BioMarine (ABM) is a biotech, fishing, marine research and krill harvesting company. They recently purchased a FlowCam for use on their krill harvesting vessel, the Antarctic Endurance.  They plan to use the FlowCam to monitor the phytoplankton that the krill eat, in order to maintain a sustainable krill fishery.

Krill, a relatively small crustacean, are among the planet’s largest biomass and hang out mostly in the polar regions.  Krill are a huge food source for many marine mammals and fish, as they are packed with rich omega-3 fatty acids.  They are also an important ingredient for nutraceuticals and animal feeds.  Interesting to note, krill is a Norwegian word that we have adopted in English to call these little guys…..krill.  The Antarctic Endurance sails out of Montevideo, Uruguay in the Southern Ocean.

Nils Hoem, ABM's Chief Scientist, first learned about the FlowCam while on a cruise last year with a team from Norway's Institute of Marine Research (IMR) where they had 2 FlowCam instruments on board the RV Kronprins Haakon, an ice-breaking polar research vessel.

You can read about that trip in our blog post - Norwegian research group studies krill in Antarctica using the FlowCam.